Posted on November 8, 2010 by fullbodytransplant 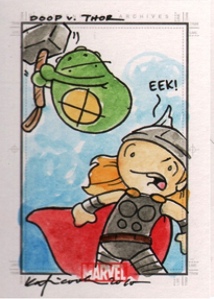 That little beauty became the newest treasure in my sketchcard collection last night.  It is by Katie Cook from the Marvel Heroes and Villains set, and it is a re-creation of an actual moment in official Marvel continuity.  Yes, you heard me correctly.  Thor got beat by a funky alien who looks like a giant green potato.  For real.

The year was 2004. Peter Milligan wrote the story.  Mike Allred did the drawings.  X-Statix was in its full glory.  It was, perhaps, one of the finest moments in comic book history.

I could not describe the scene any better than Random Tom O.  Let me surrender the stage for a perfect summary of the situation.  Check this out:

“All you basically need to know to bring you up to speed is that Doop (the globulous green guy on the cover) was kidnapped. While in custody, his brain explodes and scatters to the far corners of the earth. Fearing that his brain could be used as a weapon in the wrong hands, The Avengers decide that they must track the pieces down.

At the beginning of this issue, the Avengers have three pieces of Doop’s brain while X-Statix only have two. As you can see from the cover, the last battle is between Doop and Thor. 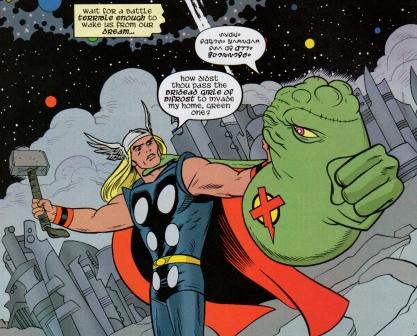 A piece of Doop’s brain has found itself on mighty Asgard. Doop and Venus Dee Milo teleport there to find it, but are waylayed by Thor, who is after the brain for the Avengers. One whack by Mjolnir puts Doop down for the count, while Thor continues his search.

It doesn’t take long for the citizenry of Asgard to bring the brain to Thor, but no sooner does he have it in his grasp when he is sucker punched by Doop. Thor wrestles free from Doop’s grasp and hurtles Mjolnir at Doop. To his surprise, Doop absorbs the hammer into his body.

Boasting about the taste of Thor’s hammer, Doop is unsettled as Thor begins to summon Mjolnir to return to his grasp. Instead of spitting up the hammer, Doop shows that he is not to be underestimated by regurgitating a horde of hammers. While Thor attempts to find the real Mjolnir, Doop claims his brain as his own once again.” 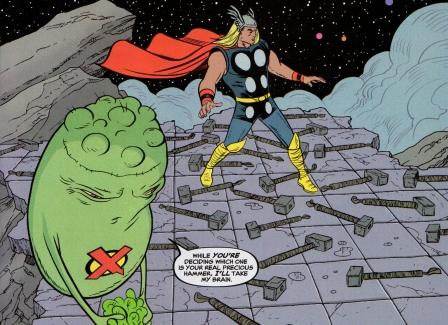 That’s my man Doop.  He had been a bit of a mystery, but we knew he had mad powers.  After this issue, he was the bomb.

Returning to the realm of sketch cards, we will unveil today’s grand finale.  With Doop revealed as the source of unlimited absorbtion abilities, Anjin Anhut did a truly magnificent series of magick morphing portraits.  These are four of the most amazing cards I have ever seen.  Especially for a funky alien who looks like a giant green potato. 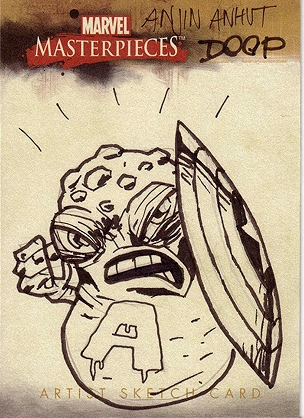